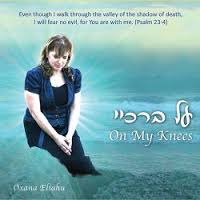 Oxana was born in Russia under the Communist regime of former Soviet Union. She was a refugee in Italy and made aliyah (immigrated to Israel) from Canada in the early 90’s, then left her parents behind, who had left Russia and came directly to Israel a few years after her.

It was in Israel that Oxana Eliahu, singer, composer, song-writer, had a close encounter with the truth about salvation and surrendered to Yeshua.

Click here to read more about her and journey of faith.