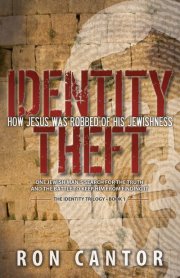 IDENTITY THEFT: How Jesus was Robbed of His Jewishness, by Ron Cantor

This is the story of a Jewish man's desire for truth. An angel visits him and shows him how Jesus the Messiah has been a victim of Identity Theft.
And Then One Day You Wake Up and Wonder, Is There a God?
Suddenly seized by the weight of not knowing for sure if there is a God—and if so, having no idea what He expects from him, David, a Jewish writer, begins a desperate search to find the truth. After looking into several religions and philosophies, he finds himself intrigued by the message of Yeshua (Jesus)… and yet, he is plagued by guilt. How can a Jewish person believe in Jesus after so many horrific acts have been done to Jews in His name?

Just as he realizes that he could never reconcile his Jewishness and Jesus, an angel, Ariel, comes to take him on a Scrooge-like journey through time, where he witnesses major historic events. He is outraged as unsuspecting Jews are persecuted without mercy, even killed, by so-called Christians. He feels the torment of being cursed as a “Christ Killer” by Nazi guards and the terror of being pursued by murderous Crusaders.

And when it seems that he has every reason not to believe, he finds himself in ancient Jerusalem, where he meets some of the very first Jewish followers of Yeshua and discovers...

the Messiah Himself, has been the greatest victim yet of ... IDENTITY THEFT!