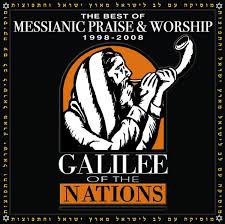 Galilee of the Nations

While Jews and Christians everywhere commemorated the miracle of the restoration of the Jewish people to their Land, another restoration of sorts was also occurring there: the restoration of an ancient sound, one reminiscent of those that once echoed through the halls of King David's palace, and along the corridors of Solomon's temple—a harmony of harps and lyres, of trumpets and tambourines, of Levites singing Hodu L' Adonai Ki Tov (Give thanks to the Lord, for He is good) with the company of Israel replying, Ki L'Olam Chasdo (His mercy endures forever)" (Psalm 107, 118 and 136).

That restored sound would flourish by way of a newly-formed record label, Galilee of the Nations (GOTN) and its inaugural Messianic praise and worship album, Adonai. This was the first project of its kind, a first-rate production featuring Messianic recording artists from the Land of Israel, including Karen Davis, Barry and Batya Segal, Esther "Eti" Horesh and others. The compilation received immediate international acclaim, securing distribution in 160 countries and selling over 250,000 CDs—and still counting.

The formation of GOTN and the creation of Adonai was an opportunity "to assist the Messianic Jewish community in Israel by helping them get their music out beyond their borders. Before this record made its debut, there had never been a worldwide release of an album that was performed in both Hebrew and English by the Messianic Jews in the Land," recalls Yochanan ben-Yehuda, the company's founder and president. Commenting on the timing of the label's introduction, Yochanan says, "If there ever was a time for this kind of music to be launched, it was 1998, the Year of Jubilee!"